Debbie made the raisin cinnamon bagel recipe with 25% whole wheat from Maine Grains, and then made a 40% polenta/10% whole wheat bagels as a new experiment.  You’ll find a detailed description in her recipe post:

Sponge:
1 tsp yeast
2-3T of sourdough starter
511 g of some combination of bread flour, AP flour, and whole grain flour
568 g of water at room temperature
Stir the yeast into the flour in either a bowl or your Stand Mixer bowl. Ad the
water and stir until combined. Cover the bowl and leave at room temperature
until it is foamy, maybe 1-3 hours.

In the same bowl, add the additional yeast and stir. Then add the remaining
flour and salt and either work in with your hands or turn on the stand mixer to a
very low speed and hope that you haven’t created a flour storm.

If kneading by
hand, knead for about 5 minutes and then use the four fold method over the
next 2-3 hours until you have a nice smooth dough that is rising nicely (quite
scientific).

If you are using your stand mixer, mix for 6 minutes, and pray that it
doesn’t overheat. The dough here does not need further rising, just a rest.

This is the stage that requires practice. While 56-58% hydration with AP, Bread,
and whole wheat seems to produce a good “feel”, the Sir Lancelot required
more flour to create a 50% hydration. It needs to be a fairly stiff dough to
withstand the boiling step.

Then line a very large sheet pan or two smaller ones with parchment (do NOT
run out of parchment!!). Mist the parchment lightly with oil.

I used the “punch a hole and shape” method of turning the balls of dough into
their final shape. Some like to make an 8″ long rope of the dough ball and
create the bagel form. I felt like I had more control over the first method. Let
the bagels sit, covered (I resorted to plastic wrap, sprayed with oil, and then
covered with linen cloths), for 30-60 minutes and then transfer to the refrigerator
over night.

In the morning, turn your oven on to 500 degrees. I used a FibraMent stone and
cast iron skillet in the oven as well. Heat for an hour.

Find a pot that you can potentially boil 3-6 bagels in, bring to a rolling boil, and
add brown sugar, molasses, baking soda, or something (or nothing) that will help
brown up the bagels. I had a friend who boiled them in maple sap in March!

Gently place the bagel in the water, leave for a minute; then flip using a slotted
spoon, leave for another minute. Transfer the bagels to a piece of parchment.
Continue until you are done. Then I placed 6 bagels at a time on my pizza peel
that was lined with a new piece of parchment. They were a bit more crowded
than I would have preferred, but I was intent on cooking all 12 at the same time
(not ideal, but I am built for speed!). Then I slipped the six off my peel (still on the
parchment) onto the stone. This was quickly repeated with the second group of
six.
Then I put three ice cubes into the cast iron and set the timer for 5 minutes. At
the end of 5 minutes, I sprayed the inside of the oven, and set the timer for
another 5 minutes. Then I reduced the temperature to 450 degrees and baked
for another 8-12 minutes (you will have to watch for preferred level of doneness.)

Remove from the oven, cool, enjoy 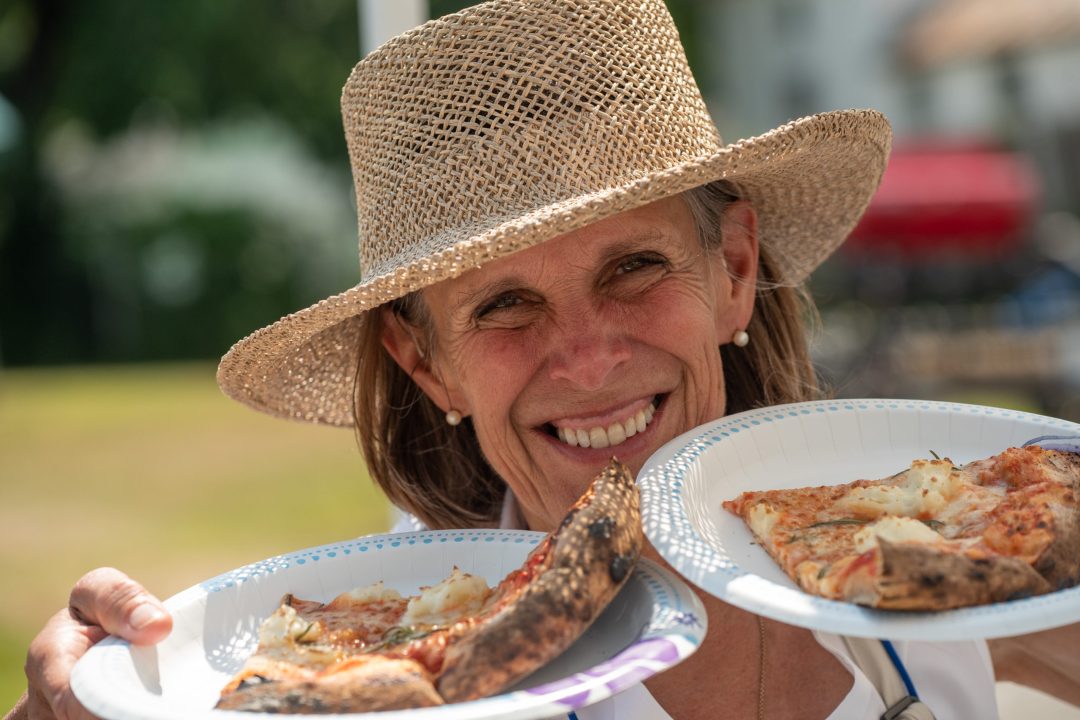 Following a career in the paper business and education, Debbie joined MGA in 2011, inspired by the Kneading Conference. While she has organized the Kneading Conference Work Study program since 2012, been a member of the Budget Committee, and then the Executive Committee, her true passion is in helping local grain economies thrive. She believes that Maine is a wonderful place to live, Skowhegan is truly “a place to watch”, and a return to being the “bread basket of New England” and a thriving economy are the exciting goals of this amazing team of people.