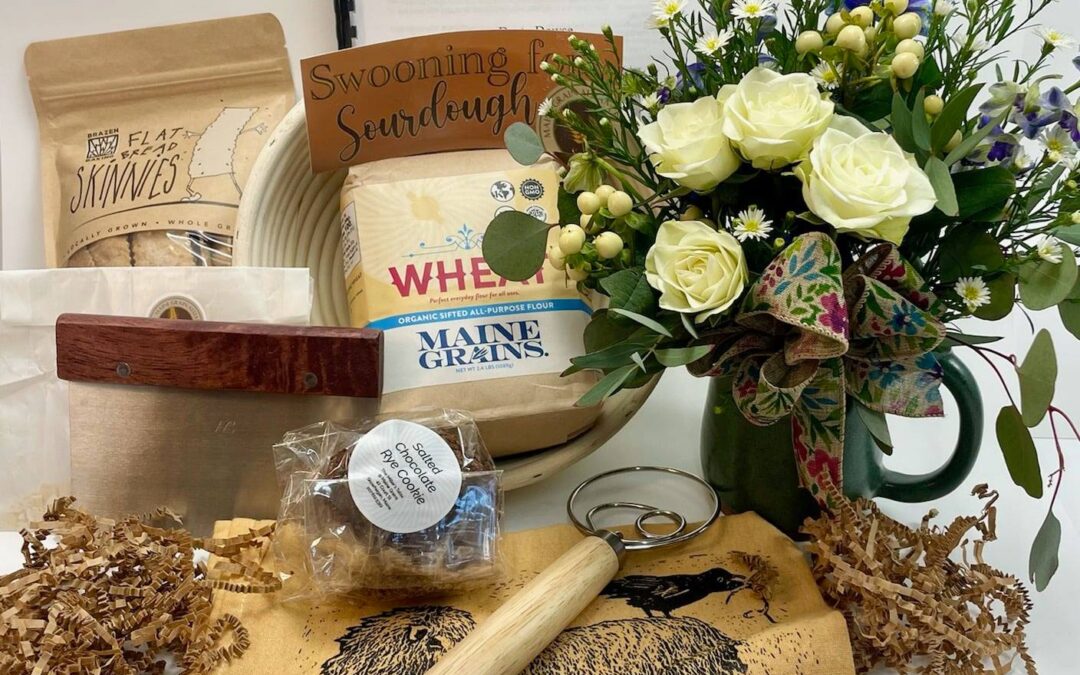 Every winter, I take up a “challenge”.  In the past, I have worked towards understanding and producing the “best” pie crust, baguettes, bagels, biscuits, and others.  This winter was the Season of Sourdough.  Though I didn’t use the more scientific design used with past experiments (control, change one ingredient/etc at a time), I did use a careful approach.  My general guidelines were to produce a not-too-sour bread and to incorporate as many whole grains as possible.

I was interested in sourdough many years ago while at the Kneading Conference.  I mentioned to someone that my bread didn’t taste quite sour enough, and the suggestion was to add more starter.  Well, more starter was added, I took the resulting bread to a dinner party, no one was swooning, no one took a second piece, and no one asked for the leftovers.  Yup, too sour, though the woodland creatures didn’t seem to mind.  So, this winter, I followed recipes from my many Kneading Conference-inspired books, and sought help from fellow board member Dusty Dowse, Montreal baker Daniel DesRosiers, the Bankery’s Matt Dubois and local Maine Grains baker, Evan Orloff.  Evan makes 100% whole grain bread at 80-85% hydration.  If he could, why not me?

Handling an 80% hydration bread is not for the faint of heart and it slithered into my hot Dutch oven, only to produce a delicious but ugly bread.  So, from those experiments, I changed hydration to 70-75% and added about 25% white flour.  I could handle those breads.  Maybe higher hydration will be my next challenge.

Then it was time to deal with the “sour”.  Daniel and Dusty reminded me to have a fresher starter, so I refreshed and refreshed and refreshed.  I would make the levain (I learned that is the proper term for the starter preferment with sourdough, as opposed to poolish, etc for yeast bread) at night, leave it on the counter overnight, and then proceed with my 70-75% hydrated, 75% whole grain/25% white flour  bread, stretch and fold throughout the morning, shape, score, and bake when ready.  Still a bit too sour for me.

Next up, with a refreshed starter, I proceeded with the recipe as above, stretched and folded, put into banneton (rice flour please!!) overnight in the refrigerator.  I allowed them to warm up for an hour or two in the morning and then baked them off.  Still kind of sour, but lots easier.

Then MGA hosted the virtual Sourdough 101 workshop with Jim Amaral. Jim is one of the very earliest bakers in Maine (Borealis Breads) to use whole grains and he had partnered with Matt Williams of Aurora Farms in Linneus who grew the grain for him early on.  His recommendations were to  begin early with your starter and have it really active by early afternoon.  Jim’s starter is a lot thicker than my typically watery starter.  Then I produced the bread as I had been doing, and baked it off late afternoon.  Hallelujah!  Just very slight sour, nice open crumb, delicious crust.  I then made the two recipes that he offered during the workshop.  Two more home runs!  I’ve found my sourdough home, and there were no pieces left from dinner last night. 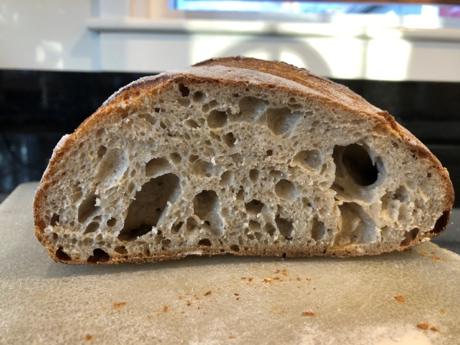 The Sourdough 101 workshop will be available soon on our website.  We also offered a “Bake Your Own Sourdough Kit” in February, a wonderfully successful fundraiser, sponsored by Maine Grains.  Included were a dried starter, banneton, tea towel, Danish dough whisk, metal bench scraper, booklet on sourdough, recipe, 86% sifted wheat flour from Maine Grains, sourdough crackers from Brazen baking, and sourdough cookies from the Bankery.  I have new appreciation for use of the dough whisk and the metal, as opposed to plastic, bench scraper.  I saved enough material to produce 6 more “Sourdough Kits”, with the flour, cookies, and crackers all in my freezer.  Please contact Kayla Starr at [email protected] if you’d like to order one.  It’s fun to know what you are doing and it is fun to have the gear to do it with! 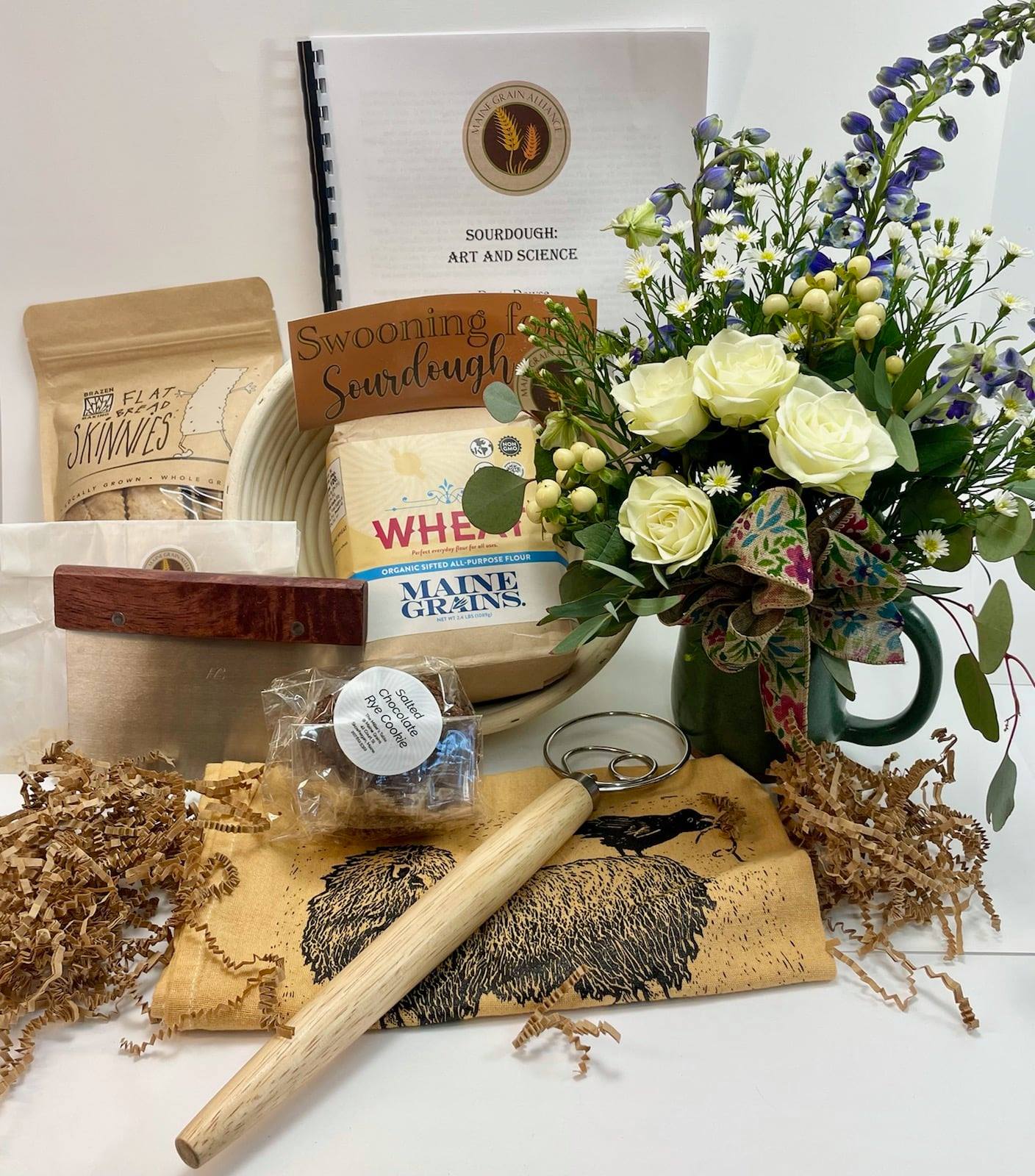